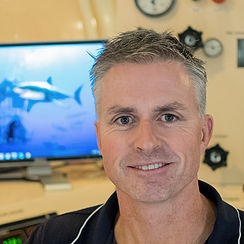 Stu is currently employed on a part time basis at the Royal Hobart Hospital as a Hyperbaric Technical Officer. Before joining the Royal Australian Navy in 1992, he completed a four year apprenticeship as a Chef at the Casino in Hobart. On joining the Navy Stu initially trained as a Sonar Operator then on to complete a Clearance Diving course in 1996. On completion of his basic course, he transferred to Diving Team Four based in Western Australia before discharging in 2001, when he spent twelve months at the Naval Diving School, HMAS Penguin as an assistant instructor.
On completion of Stu’s time with the Defence Force, he worked offshore as a Commercial Diver in “many undesirable places around the world”. On completion of his time diving he qualified as a Tower Operator for Hyundai Heavy Industries, responsible for controlling the pipe-lay barges out of Korea and China where he worked for three years.
In 2007 Stu joined the Tasmanian Police Service where he served as a Constable and a member of the Police Dive Squad. In 2011 Stu resigned to take up his current position at the Royal Hobart Hospital.
Whilst at the chamber Stu has completed Doppler trials in Canada and shortly off to the United States to complete a maintenance course in the Sea-Christ mono place chambers. Stu says “I am keen to assist where I can with the HTNA as I believe it has a bright future”.
Stu is 104.